Marking the International Day for the Elimination of Violence Against Women, celebrated on November 25th, the Portuguese Association for Victim Support presents a new awareness campaign. This campaign was developed by the creative agency Mustard, in collaboration with Clara Amarela and Digital Azul. The campaign warns of the consequences of ignoring signs, such as verbal violence, control and distrust, both on the part of the victim and the neighbors and other close people.

See domestic violence with your ears. For many victims it all starts with words. If you hear them, don't ignore them. 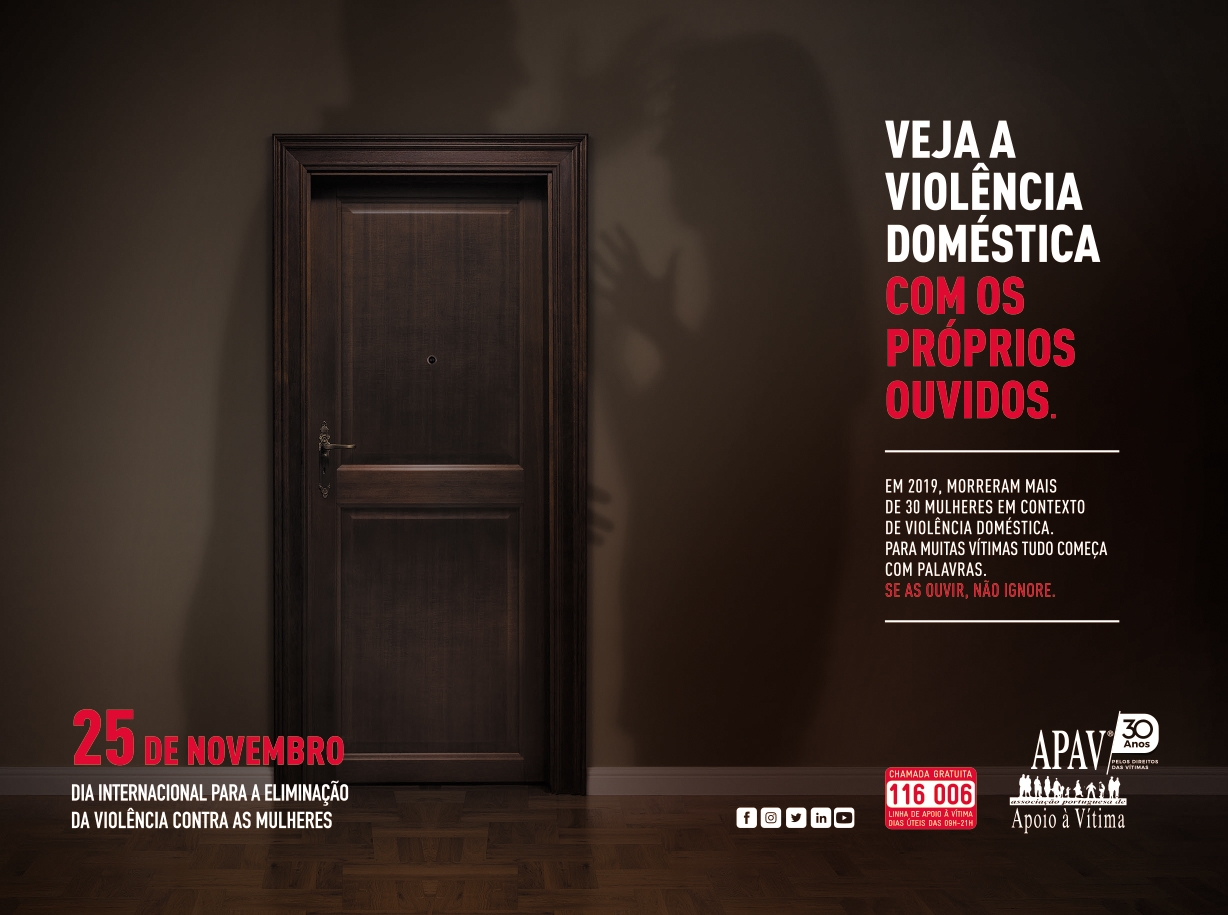 "What happens on the internet is not just on the internet" is the motto of the new awareness campaign of the Portuguese Victim Support Association. Data breaches, phishing, online scams, grooming, sextortion, cyberbullying and hate crimes are the seven themes for which it is intended to alert, with the objective of preventing online victimization and promoting the dissemination of the support services of the Safe Internet Line (800 219 090).

This campaign was developed creatively by the agency CARMEN / YoungNetworkGroup and was promoted in ROAR Project: Empowering victims of cybercrime.

Domestic violence, cybercrime, harassment, hate crimes. In the Year that celebrates 30 years, the Portuguese Association for Victim Support brings together in a book 15 short stories and 15 original illustrations that have as their starting point crimes that often come to them through the voice of the supported victims. The book “À Roda de uma Vontade” came to bookstores on November 13th.

For this project, APAV has the support of Quetzal Editores, which contributes to this cause, inscribing its work in the defense of the values of citizenship and equality in general, and in the idea of a more just and less violent society, in particular.

Participate in this book with their texts and illustrations:

The book is now available in physical and online bookstores. It is now possible to buy the book at Bertrand, FNAC, Almedina, Wook and others. Also available on the Quetzal website.

Europe was once again hit by a violent attack in Vienna on 2 november 2020. In the previous week, attacks in Nice and Lyon were also reported.

The Portuguese Association for Victim Support  expresse its sorrow of the victims and solidarity for the many member, friends and community affected by the incidents. Violent acts like these have a devastating effect on the direct and indirect victims. It is crucial that those affected by these crimes receive support so they can manage do deal with the immediate and long term consequences.

The APAV Family and Friends of Victims of Homicide and Terrorism Victims Support Network (RAFAVHVT) is available to support any citizen who has been affected or experienced an attack, as well as their families and friends.

Support Network for Family and Friends of Victims of Homicide and Terrorism (RAFAVHT) | This email address is being protected from spambots. You need JavaScript enabled to view it.

Throughout the day, we created a space for sharing knowledge and exchanging good practices, advancing recommendations on how to act on cybercrime and the support provided to its victims.

Throughout the morning, specialists presented national, Europeans and global perspectives related of cybercrime. We had communications about “The importance of the New European package about Digital Evidence”.

“Challenges in prevention and investigation of child sexual abuse online”. “The Internet of Things (IoT) – We are more vulnerable to cyber-attacks?” and “Risk Factors Associated with Cybervitimation”

Find more about the conference and the project “ROAR: Empowering victims of cybercrime: https://apav.pt/roar